Developed by Marcy Scott with the unique minds of dyslexic students as the driving force, Logical Letters began namelessly. Over thirty-five years ago, Marcy began using traditional remediation programs when she was a teacher in a class for dyslexic students.

Various experts in the field helped her to learn the leading methods of the time for teaching reading and spelling to dyslexic individuals.

She was impressed with a system that focused on individual phonemes within words and offered a structural and  spatial format to their arrangement. She was also feeling success with multi-sensory methods that focused on phonemic awareness. 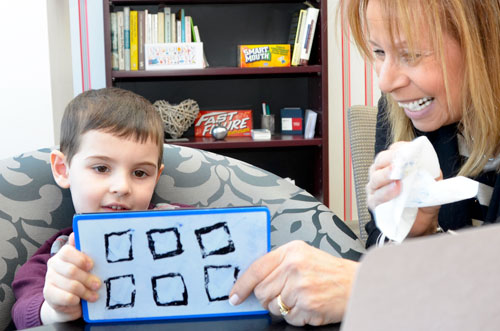 When Marcy later directed a public school resource room for dyslexic students, further exploring these methods, she gained additional understanding of the unique and capable learning style of students with dyslexia. Marcy began to merge the successful elements of the numerous programs while addressing their inherent shortcomings. Through continuous adjustments and the addition of many unique features and components, the Logical Letters program began to emerge.

Her students’ natural curiosity, creativity and “dyslexic style” questioning led to her gradual creation of the stories that generate logic from the English language rules. Her delight in playing with language and children, together with her natural verbosity, enabled her to develop the stories into a cohesive story-telling “mini-series” with an overall theme. The overwhelming success was riveting. Compared with the original work Marcy was concurrently doing without the added storytelling component, the advantage of the stories became evident. The later twinning of the stories with real-life episodes produced even more significant results. What fun! The evolution of Logical Letters was truly happening.

As Marcy developed a small private practice, enabling her to learn from the luxury of one-to-one teaching, this newly developed program evolved more and more. Individual successes were noticed in schools and by psychologists performing testing. Upon request and due to popular demand, Marcy began to offer workshops in this method to train teachers and resource room reading specialists. They too enjoyed great success with this method and provided positive feedback. This led to the copyright of the program and thus Logical Letters was no longer nameless.

In 2003, Logical Letters moved to its current locale at 245 Victoria in Westmount. Since then the program has continued to develop with many, many children enjoying the benefits of the Logical Letters approach.